I LOVE teenagers!  I’ve been so excited for years for my kids to grow up to be teenagers, and I’m reveling in this moment.  Just like all of the other fun stages of childhood, trying my best to soak it all in….capture it on camera…so I can relive it over and over for years to come.

But dating in high school can be tricky for teens – especially with social media in the mix. So, I’ve come up with 5 rules – principles really – that will keep them safe while still allowing them to enjoy themselves.  Use these recommended principles to help you make your own rules ahead of time. If you don’t decide in advance, you’ll be more likely to stress out and make poor last minute decisions.

Most of what my husband and I have decided when it comes to dating expectations for our kids, stems from our church’s suggestions in what is called The Strength of Youth guidelines. In a nutshell, it’s like a teen guide book on a bunch of topics.  It outlines suggested behaviors that we believe will guide them to living a happy lives. It is something both my husband and I grew up with as well, and had similar guidelines as teens.

Your rules may be different than ours, but hopefully the 5 principles below will provide a solid foundation as you set dating rules for YOUR teens. 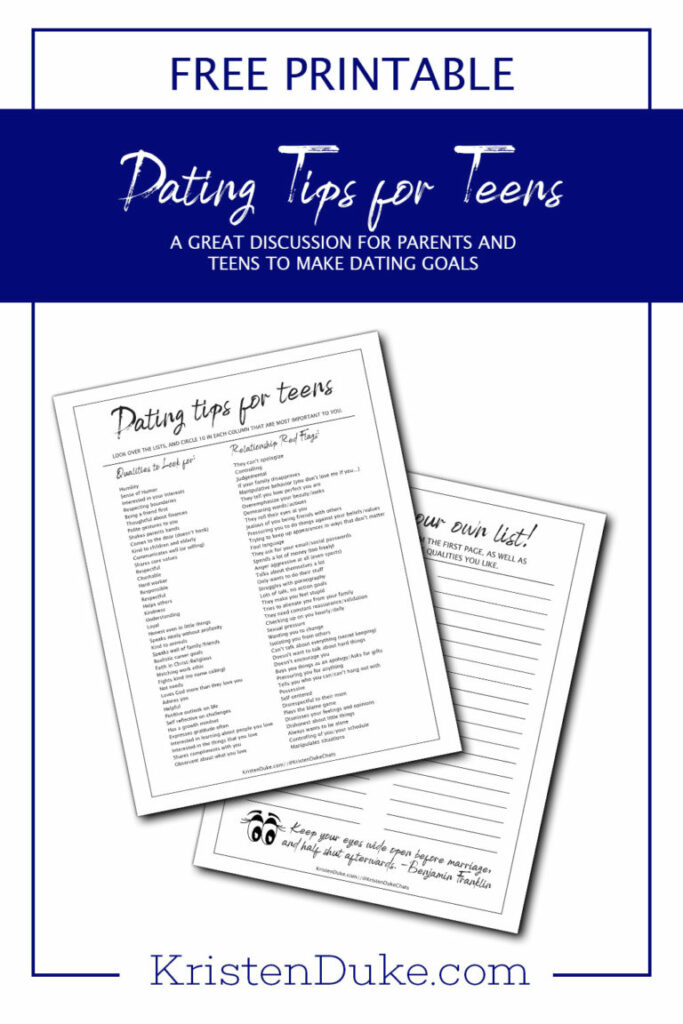 Thank you for joining my email list! I can’t wait to spoil you and promise to keep your email address private

Couples can form as early as elementary school.  Although it’s fairly innocent at that age, and definitely not considered “dating” in my mind, it’s one of the things that as parents we should be aware of.

Dating gets complicated, and life gets more complicated the older we get. Letting our kids just be kids for as long as possible is wise and one way we can do that is to decide on an age that we feel is appropriate to begin dating.

Our family rule is that dating starts at the age of 16. This is the age that is recommended by the American Academy of Pediatrics and my religious leaders. Our teens have always known this because that decision was made well in advance. So far, we haven’t had any push back on that. Not sure if it’s because of my chill boys, or because they’ve just always known the family rule.

My daughter was “asked out” (what does that even mean?!) in 4th grade, and though I thought it was adorable and fairly harmless, she said, “I can’t date till I’m 16” to the boy, and that was that. I think she was flattered, maybe thought the boy was cute, but because our family rule had already been established, she had an easy fall back of “I’m not allowed to.”

In my head, I was kinda like….”well, you could have…” and thought it was sweet, but after thinking about it more, I was very impressed with her for being so mature.  She told me months later that it got complicated and awkward for her friends that “went out” with a boy (mind you, this is 4th grade), and she felt bad for them.  Who wants to deal with all that at 9 and 10 years old?

Even when our kids turn 16, we encourage double dating until they have graduated from high school (and their decision making skills have a bit more practice). There truly is safety in numbers!

You may not choose the exact same ages our family has, but the important thing is that you have an age and that everyone in your family knows it from the time they are young – and that they understand why as soon as they are able.

2. Date for fun, social skills, and to get to know others

In this day and age with texting so much, the art of communication is getting lost, and it seems people aren’t dating as much just for fun.

When teens first starting dating, I don’t believe it should be so serious, it should be more of just practicing social skills. My kids may be just fine sitting at home, or just “hanging out” with their friends, but I WANT my teens to go on dates…JUST FOR FUN! It doesn’t have to be serious, or because you are a couple with someone, just GO!

Yes, it’s scary and awkward and complicated at times, but that’s is exactly why dating is so important for growth and learning, and stepping into adulthood! Gotta push through all of that and conversational-ize! Double dating is ideal for this – conversation is easier in small groups where you aren’t overwhelmed by a crowd, but aren’t left with just 1 other person to have a conversation with.

In our family, the purpose of early dating is to gain social skills and get to know lots of different people so you can decide what qualities you truly like in others and what you dislike.

The goal ISN’T to find a “girlfriend” or “boyfriend” and then spend all your time with just that one person.

Eventually, the goal of dating is to find a spouse.  But a 16 or 17 year old who has gone on dates with a hundred people will make a far better choice in a spouse than one who dated the same person for 2 years and didn’t get to know anyone else.

Ok, I’m going to go there.  I talk with my teens about all things sex – even at the dinner table.  So why shouldn’t I discuss it here.

In our family, abstinence before marriage is important.  I believe this is true for most families of faith of any kind.

Dating naturally progresses to more physical and more physical intimacy – as it should.  But sex has consequences that many teens are ready/able to handle.  And I’m not just talking about teen pregnancy.  I’m talking about their emotional health.  Breaking up with someone you’ve had sex with is far more devastating that breaking up with someone you’ve only kissed.

The first two principles make a goal of abstinence easier to achieve.

Not starting to date too early

Physical intimacy naturally gets more an more intimate the longer we date – as it should.  If a kids starts dating at 12 instead of 16, they are going to naturally want sex at a younger age than someone who waits until they are 16 to start dating.

Dating for fun and growth opportunities

When fun, social skills, and learning what you are and aren’t attracted to is the goal of dating INSTEAD of finding someone to pair off with being the goal abstinence before marriage becomes more likely.

Beyond those first 2 principles, there is 1 more thing we can do to make abstinence before marriage the likely outcome.  We can TALK to our kids about sex.  When I said we talk about it around the dinner table, I meant it!

I want them to know that NOTHING is off limits to discuss with me. They will jokingly say, “mom’s going to talk about this stuff again…” with a teasing eye roll or something, and I’m ok with that. It may be a bit uncomfortable for them, but I want to push through that.  They need to know that I am not uncomfortable with sex.

Here are some ideas:

Treating others how you want to be treated is a great moral goal.  It is part of being Christ-like.  But it goes beyond that.

If your teens want to date people who truly care about them and think about their needs (and who doesn’t?), they will need to BE that kind of person. Kindness, generosity and compassion go a long way in building quality relationships of any kind – but are especially important to dating where vulnerability is real and things can get complicated quickly.

Questions like “Should I text her?” or “Should I tell him I’m no longer interested” become much easier to answer when we think of what we’d want to someone to do for US instead of thinking about how WE might look dumb.

One of the scariest parts about dating in the 21st century, especially for teens, is the internet.

Don’t just hand your kids a phone and be done with it.  Teach them how to be safe online. Things like:

If you want more help talking to your kids about online safety, you find my Phone Etiquette cards helpful. 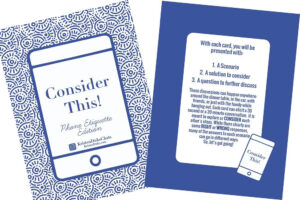 Even if you follow all 5 of these principles, it’s inevitable that with this fun adventure of dating comes heartbreak too. It’s out there for all of us. My heart got broken, even when I did the breaking up.  It’s hard, but remember, even this part of dating is important.  It helps us gain experience, and shape decisions for adulthood.  Whenever I hear a certain Celine Dion song, I still think of someone I broke up with in college, someone I cared about, but it just wasn’t working out. I cried as I listened to that song over and over, wondering when I’d find my true love.

But ultimately, it was just one step in the right direction that led me to my husband, the perfect match for me. Help your teens to remember this when they struggle.

I’ll part with a picture of myself and my teenage boys. I sure love them. I love their goodness and thoughtfulness.  And though they’ve got much learning in the art of communication ahead of them, I know they will figure it out. I’ll be right there to urge and nudge and love.

Dating is an important aspect of life…you gotta do it! As much as I adore my teens, and secretly wish they don’t grow up and leave me, I want them to spread their wings.  I want them to eventually get married, and you can’t do that without dating!  I can’t wait to meet the girls they will bring home.  These girls will help shape my boys into men with their relationships.  I’m going to try my best to not be “that crazy mom” who is trying too hard.   And I will cross my fingers that my future daughters-in-law will see me as a friend and confidant as well. 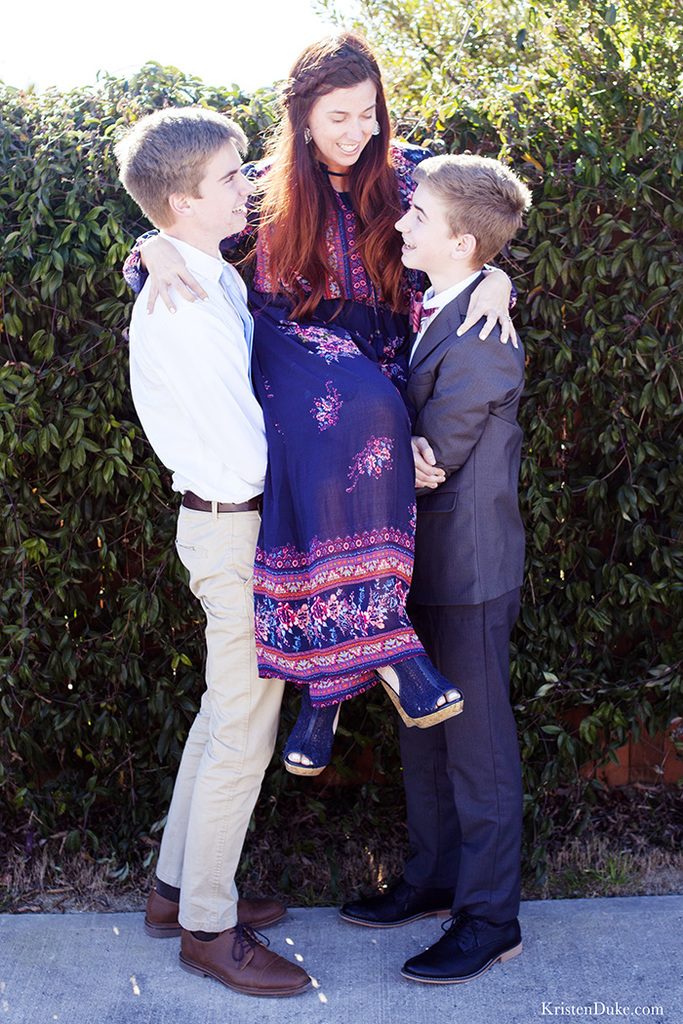